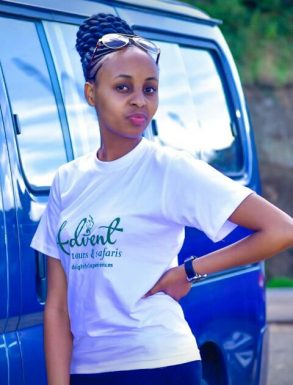 On September 1994, a baby girl was born in Kakamega, home of the famous chicken and ugali enthusiasts. Unlike other kids born at that time, she was light skin and smiled a lot. She exuded great confidence, joy and felicity. She was named Miriam Ikegu.

I studied at St. Teresa Isanjiro from nursery to class six. The post-election violence which took place in 2007 forced me to move to Kiambu County where I joined Kimende primary school. My parents moved from Kakamega to Naivasha. It is at Naivasha that I got a chance to tour almost every interesting site including Lake Naivasha, Mount Longonot, Lake Nakuru, Lake Bogoria, Hells Gate and many more. I loved travelling and tours so much. Later, I was admitted at Chebwai Adventist School where I pursued my high school education.

But what shaped my career decisions? Let’s have a look at my early years. Psychology says the first seven years of a child determines the lifetime picture.

My dad loved watching wild animals. Often, I would sit on his lap and watch the wild animals. During the holidays, he would take me to one national park or another. Moreover, being an Adventist, I had the opportunity to go through Adventurous club and Pathfinder club. The clubs gave me opportunity to camp in forests or Hike Mountains. There were times when I went to the airport and I wished to be an air hostess just so I could travel the world.

Who can explain my joy when I joined Amboseli Institute of hospitality and technology? I was like a frog thrown into a pool of water. I was at home doing Tour Guiding and Administration. I was actually happy that my dream was taking shape. I learned how to do:
– Air ticketing
– Visa processing
– Costing
– Customer service
– Preparing holiday packages

I did my internship at kestel tours and travel where I studied more and practiced what I had learned at Amboseli institute of Hospitality and Technology.

I was employed at iclean East Africa for one year before shifting to work in a perfume shop. Things were not working well. I was literally doing what I never imagined I was going to do. No way! I could not accept to let my life drift and drift aimlessly.

With the skills I had learned at Amboseli Institute, I decided to open Advent Tours and Safaris.