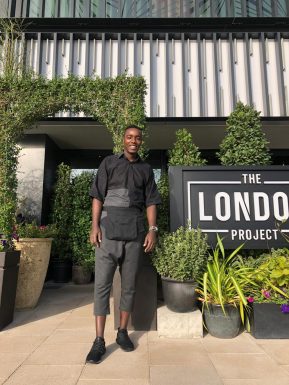 I joined Amboseli institute back in 2013 as a passionate foodie and I wanted to learn more. Being a Management student had to be all rounded from Front of House to Back of house, house-keeping to front Office and basically all departments of a Hotel. It was a two and half year course with back to back classes in Management.

I did two internships sponsored by the school, one at Nas which I learnt more of Mass production. The other with Serena Group of Hotels which the school sponsored. This is where my passion grew more and I tend to love the kitchen. I participated in most school functions and I was hands on. I got awarded certificates of Merits, completed my course in 2016 and graduated.

Worked as a chef in Tripple O Hotel, after 6 months went out of Kenya to work in Dubai. Worked 2 years at Poco Loco – a Mexican restaurant – as a Team leader.

In 2019, I started a new job as a Senior Waiter at a new 5 star casual Dining restaurant called The London Project. Thanks to Amboseli for the vigorous and hard work put into coaching students to become Good Hospitality Ambassadors.

One Reply on “Bryan’s Story”